The Five Reservoir Stride is another walk featured on walkridesouthpennines.co.uk (here it is). It is an excellent walk. So good, in fact, that I couldn’t resist adding distance to it as I was on my way. The GPX route download doesn’t reflect this but you’ll see where I went during this write up or if you go yourself. And do you know what? You should go. Go this weekend, you’ll love it. 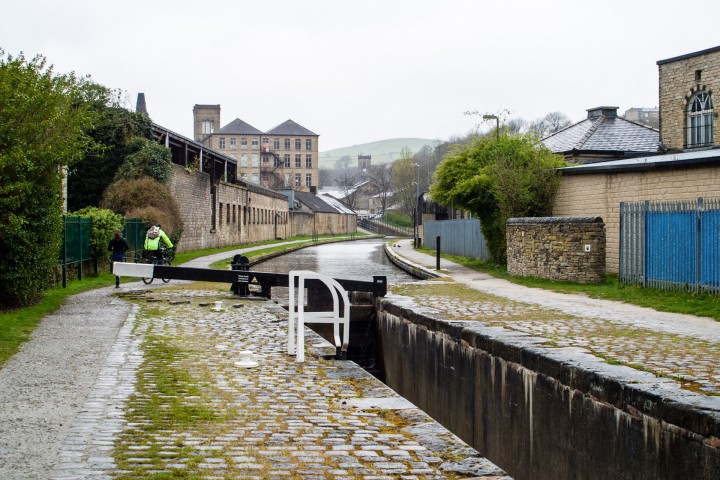 The walk takes in five reservoirs, hence the name the Five Reservoir Stride (the walks can be quite literally named on that website, e.g. the Station to Station walk). This walk is basically a station to station as well, setting off from Slaithwaite and heading to Marsden. I guess you can go from Marsden to Slaithwaite instead but the website says to start at Slaithwaite and who am I to argue. I drove to Marsden station and get the train back towards Huddersfield where, just as I left the train, the heavens opened. It was to rain on and off throughout the day but nothing too serious. It does mean that there are some gaps in the photo gallery where my camera was hidden away, though.

Once you’re off the train, you skirt around the edge of Slaithwaite before heading across the canal, across the river and through a park which may or may not be Slaithwaite Spa Park (sorry for the vagueness!). You’ll then walk up an unmade road out of the park and up to the A62. The next time you cross this you’ll be walking underneath it in Marsden in a few hours time.

Cross the main road and into the cul-de-sac opposite. Head left on a path heading uphill where you’ll get to a junction of five paths. I turned the wrong way here and took a sharp right onto a path of the Colne Valley Circular walk. This was fine, I thought; walk along this until I get to Heywoods Farm where there is a path going up the hill to join the road at Green Head. The path I was looking for didn’t seem to exist and the proper way out of the field was over a stile which had several very inquisitive cows on the other side. I set off to investigate a way out. A couple who were walking behind me got to the stile and were trying to shoo them away. They didn’t have any luck. by this point, I’d spotted a gate into the field in the farmyard so suggested that we all cut through there. It got us all safely out onto the road without being trampled by or, worse still, licked by lots and lots of cows. Anyway, I eventually rejoined my route at the junction of High House Edge and Jerusalem Road. 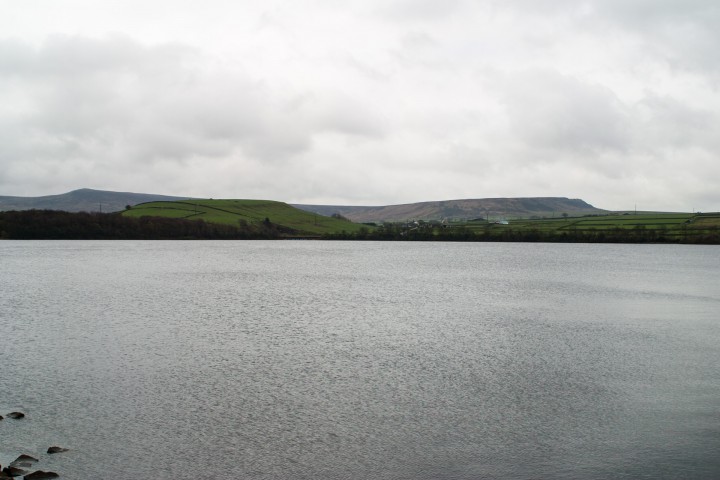 My geeky side had a field day during this stage. On the way to the walk, I’d seen an old Ford Sierra XR4 and a Ford Escort XR3 shortly after starting. I saw a Ford Fiesta XR2 at the top of High House Edge and was delighted with myself for completing the set. Other people wouldn’t find this interesting or exciting. In fact, most people wouldn’t even have noticed any of the three cars I saw that day. Thankfully I was on my own so couldn’t bore people with my general glee at seeing these vehicles within such a short space of time. This is why I’m devoting a whole paragraph to it here, and heartfelt thanks go to you for reading it.

So. I turned right a couple of times to reach Reservoir I: Blackmoorfoot Reservoir. I stopped for a short time here on one of the benches that are alongside. There I was, eating a Yorkie, when a woman came by and picked up a bag of dog, erm, “mess” from under my bench. “Just something I left, earlier”, she said. It put me off my Yorkie – I thought it would have been the dog that had left it.

There are ducks and all sorts on the water here. With trees all around as well I expect it would be a great birdwatching place. I must admit that I took little notice on the day and carried on, walking across the dam. If you are planning to do this walk, here’s a piece of advice. When you get to the dam, walk through the gap in the wall and follow the wall on the other side to the water otherwise you’re stuck alongside it until you get to a wooded area at the end adding quite a steep hill to the journey. 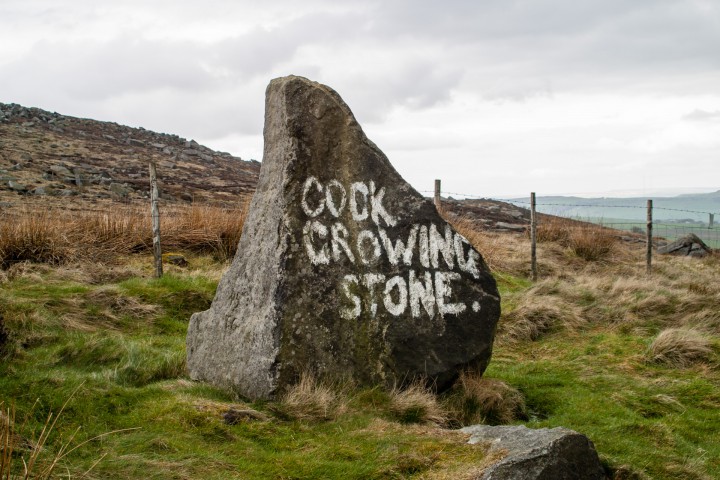 You will now be reaching the Blackmoorfoot Conduit, your friend for the next mile and a half. This is a really easy bit of the walk, quite welcome after the steep climbs of before. Looking left, you’ll see Helme then Meltham. Look right and you’ll see Meltham Cop. At one point you’ll see a pub called The Travellers Rest. It looks tempting to a walker but looking at their website, the food looks a little posh for someone with muddy boots.

After continuing alongside the conduit, or catchwater drain as this section is referred to on the OS map, you’ll get to a fantastic flood gate with some beautiful big cogs, levers and such like. Again, my geeky side loves all this so I took a few photos which you can see, below.

Once you’ve finished marvelling at the flood gate, you’ll carry on and turn right up a track leading through a very untamed hill farm. There were some beautiful young highland cattle which I had to get very close to and some pigs who came to say hello. The farmer was working on some trees half way up the track, he said hello and didn’t seem to mind people wandering through. It is a signposted public footpath on a published route so I suppose he shouldn’t mind, really!

You’ll eventually reach the road that branches off from the ‘Isle of Skye’ road towards Meltham, cattle grids and all. Walking up here, my eye was caught by a large stone which had “Cock Crowing Stone” painted on it. Now, call me dirty minded if you like, but at first glance it doesn’t half look like “Cock Growing Stone”. That ‘C’ needs tidying up a bit, I think. 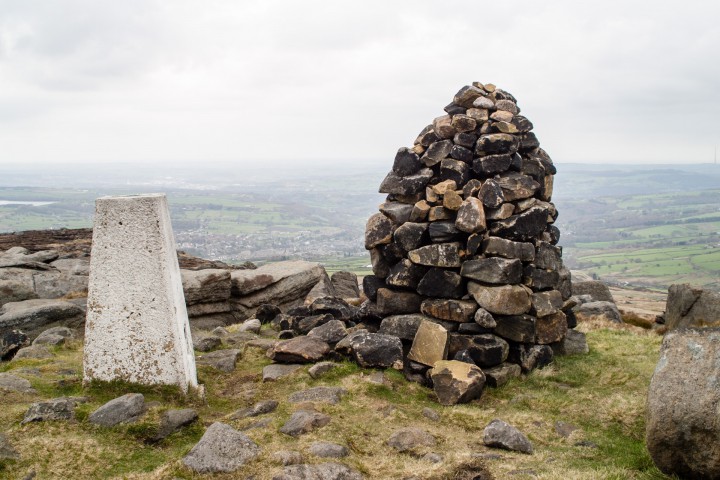 This is where I took my final and most drastic detour (and only deliberate one), deciding to visit the trig point at the top of West Nab. It’s not a clear walk to get to, it was quite boggy and I had to climb over a fence but the summit is fantastic. A trig point, large cairn and a boulder field. It was like a playground. I had some lunch up there with the wind ripping past my ears. There are some funny stones up there, I found out afterwards, with concentric circles and such like. I must go back and check them out at some point. I quite fancy the idea of watching sunrise or sunset from up there too. With it being a 5 – 10 minute climb from the roadside, this is quite do-able.

Whether you decided to head up West Nab or not, you’ll continue up the road, nearly to the junction with the ‘Isle of Skye’. Just before, you turn right and join the Pennine Way, heading down past Reservoir II: Wessenden Head Reservoir. It is all downhill from here as you head back towards Marsden (ok, there’s a small slope on the other site of the valley back to the station but apart from that…).

I can’t guarantee this will happen for you, but here’s what happened half way down Wessenden Head Reservoir for me. A family were walking up the hill with the mum carrying a lamb. They were looking for the lamb’s mother, putting it down near sheep and seeing if they paid any attention to each other. It was sad to see this lamb being put down on the ground, ignored by a sheep then running back to the woman who was carrying it, baa-ing loudly. I reckon it’s probably best not to get involved in that kind of thing, myself, but fair play to the family who appeared to know what they were doing and certainly trying to help. 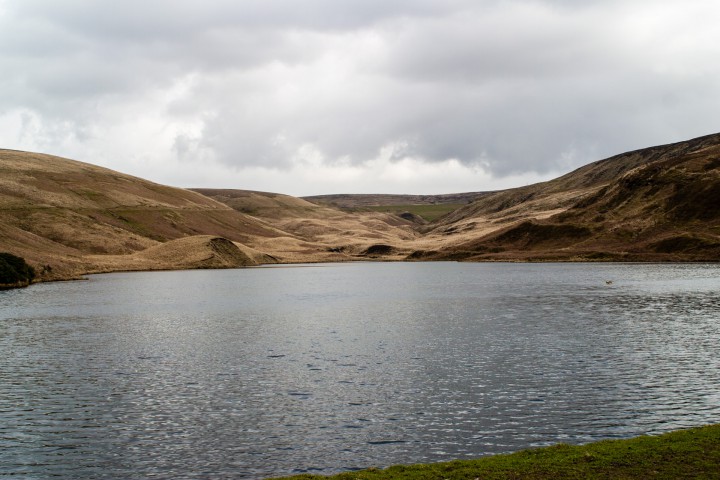 The rest of the walk is downhill, smaller valleys intersecting the main one you’re walking down, reservoirs on the left. There’s Reservoir III: Wessenden Reservoir, Reservoir IV: Blakeley Reservoir and Reservoir V: Butterley Reservoir. Eventually you’ll reach an impressive waterfall across the other side of the valley. There is also a path that heads off down that way which looked very tempting but headed off in completely the wrong direction. After this write up, I think I’ll create a route that goes that way.

I have a massive recommendation if you plan to do this walk. Ignore the bit where you walk past the mills. They looked great from the bottom and when I do this walk again, which I inevitably will, I’ll include this as a part of it.

You’re back in Marsden now and after walking past a sports club, across the river Colne and under a road bridge, you’ll find yourself back at the station, tired, but feeling great.

This is a brilliant walk made even better by the addition of a summit, albeit an easy and relatively short one and a much better bet than the Station to Station walk found on the same website. It has rivers, moorland, reservoirs (obviously), ups and downs from town centres to the middle of nowhere, taking in part of the Peak District National Park.

Click images for larger versions. Images of 1920px along the longest edge are available from the Five Reservoir Stride: Slaithwaite to Marsden Flickr album.