Ever since coming back from The Lakes in January, I’ve been itching to get out and walk again. The weather’s been pretty cold and wet recently but with this past week being unseasonably warm, I took the chance to go out. The forecast was for rain but I wasn’t bothered. 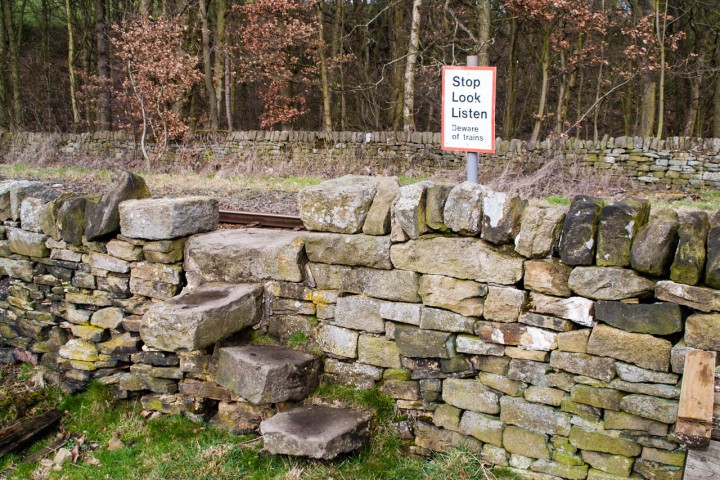 I’ve been using the excellent OS Getamap service to look where to go. I’m all for following traditional walks but quite often I like to invent one for myself. This is one such walk.

Free on-road parking at Berry Brow station is plentiful so leaving the car there and travelling three stops down to Stocksmoor and walking back via Castle Hill looked pretty good to me. At around 5½ miles, the route was a good one to get me back in the groove.

For £1.65, you can travel the three stops on the train. At weekends, the train leaves at 19 past the hour (most of the time) and takes around 10 minutes. There’s next to nothing in Stocksmoor apart from good sized detached and semi-detached houses. It’s a small place with no pubs or other amenities that I spotted, not that I was paying a whole lot of attention. The station is one platform only and the walk starts as soon as you get off the train, if that isn’t a silly thing to say.

Going out of the station and through a car park, you cross a road opposite the village hall. Going through the village hall’s car park, there is an unmarked footpath leading to the imaginatively named Stocks Moor Road. Turning left here, you walk past a row of houses for around 550m. After passing the last house, you turn right through a narrow gate (there are a few narrow squeezes on the walk) and downhill through a couple of fields until you reach the wall which runs parallel to the railway line you’ve just travelled down. There are some steps built into this wall (I’m sure there’s a technical term for this feature… I’m yet to learn it!) which you climb, then cross the railway track – stop, look, listen and all that!

From the other side of the tracks, you’ve got a couple of wooded areas to walk through, each with their own stream, both with footbridges. This means there’s a bit of up and down hill walking to get done but after this there’s quite a bit of relatively flat walking to do, well, as flat as this area gets, anyway! The wooded areas are called Brown’s Knoll Wood and Clough Wood, and are marked as such on 25k OS maps. 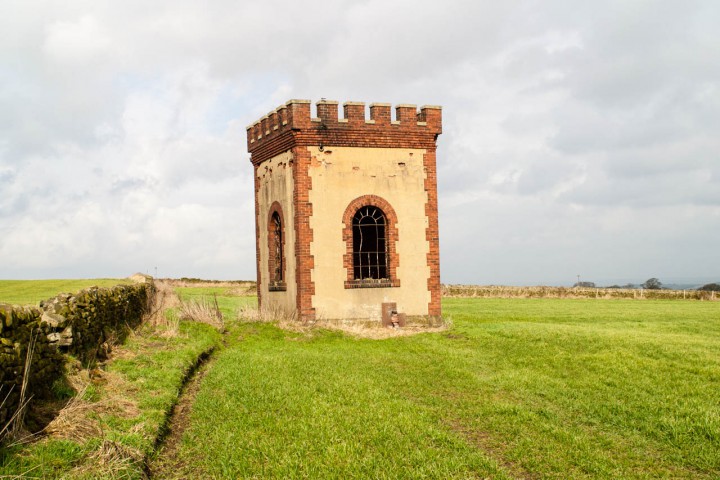 After the woods, there’s a field to walk across until you reach the driveway of someone’s posh house where a couple of kids were hitting tennis balls against their garage roof, letting them run down to hit them again, when I walked past. At this point, your eyes, as mine were, will be drawn to a sturdy fortress-like building in the field opposite (though be sure to look left at some point towards Thurstonland, the church looked pretty nice from a distance). Although it isn’t on the route which I had planned, and which you can download below, I was drawn to it. There are drainage ditches around the edge of the fields and they look like they’ve been walked beside or in quite a bit. Be careful not to do as I did as I was approaching – I was looking at the building and not watching where I put my feet. I ended up encircled in a manure dumping area – the smell isn’t great!

The weird little fort thing, which a friend of mine reckons is some kind of watch tower, has some lovely brickwork but has fallen into disrepair. The window frame, if ever there were windows, were skewed and rusting. I wasn’t expecting to see an archway entrance around the far side but I did. Inside was a fair bit of rubbish, a hole filled with spent shotgun cartridges and some pellet rifle targets which had been used but not by any good shot. After hanging around there for a while, I turned back, though not all the way to the road. Another path alongside a wall led me back to my intended route.

The footpaths across the field are obvious enough; not heavily worn but it’s clear to see where they lead. The walk becomes relatively featureless around this point apart from the lovely views all around. You’re just crossing fields until reaching the village of Farnley Tyas. However, you will get your first glimpse of Castle Hill around here (ignoring the fact that it’s right next to Berry Brow station where you set off from). 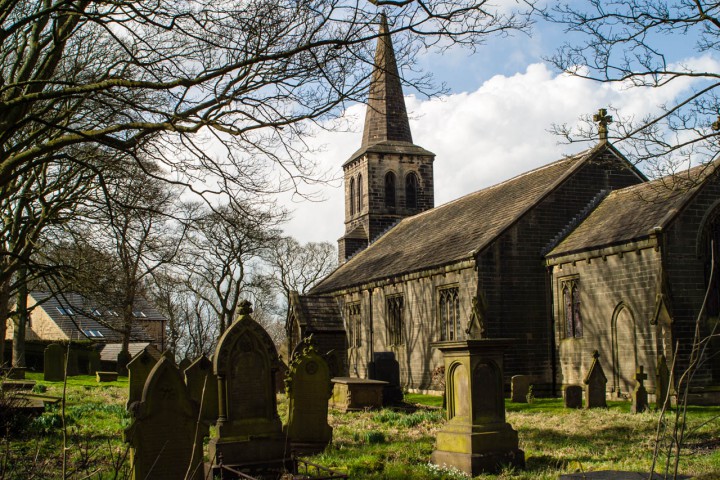 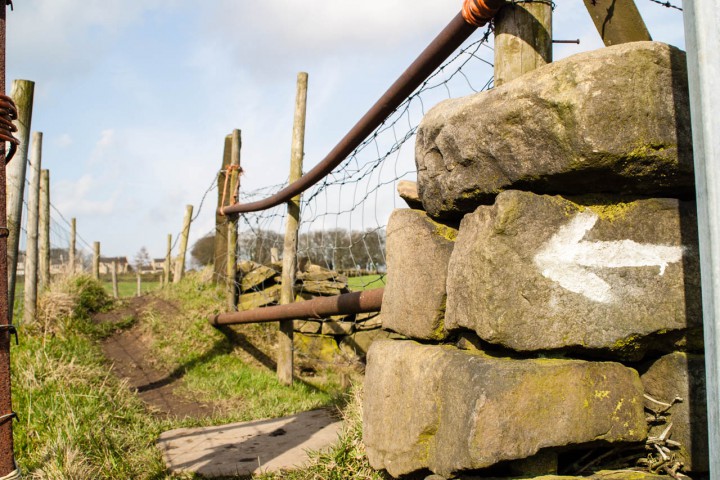 Must be this way then…

As you reach Farnley Tyas, you’ll pass St. Lucius church on your left. With there being a couple of benches in the churchyard, I stopped here a while to have my lunch and a brief rest, as well as using a stick I’d found to pick mud and, unfortunately for me, manure, off of my boots! 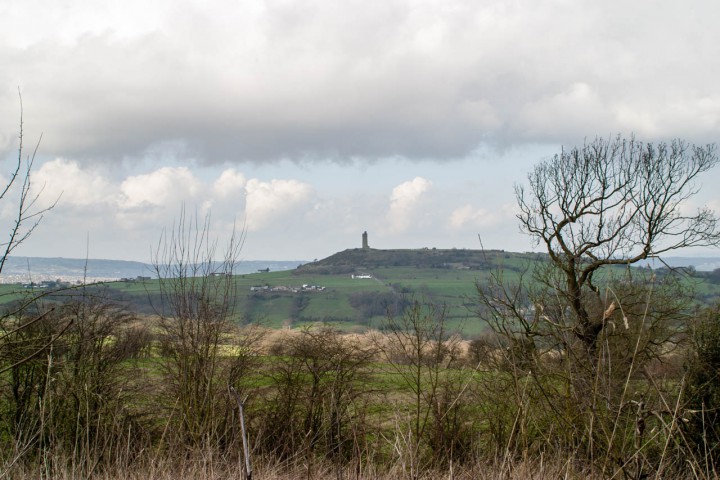 If you travel through the churchyard, you’ll come to the main gates leading onto the road trough the village. Turning left out of here will bring you to a great vantage point of Castle Hill, allowing you to gauge the distance remaining as well as the drop into and climb out of the valley of Lumb Dike in between.

The lovely Golden Cock pub is the focal point of Farnley Tyas. They welcome walkers, though not muddy boots, and as tempted as I was to sit in their beer garden with a pint, I decided to press on.

Passing the pub, you keep left then left again onto a footpath leading down into the valley. Birds were flying across the path in front and behind from hedgerow to hedgerow giving something to look at on this fairly sheltered part of the walk. It’s downhill for a while as you enter Royd House Wood. There are springs and streams around here as well as the world’s most pointless stile, then there’s short gap in the trees giving a nice view over towards Fenay Bridge and Lepton.

Molly Carr Wood is up next which has a steep hill down, though stepped, and a footbridge to cross Lumb Dike. As if to remind you that it’s all uphill to Castle Hill from here, the other side of the river is a steep climb up to another field, where the woodland ends. Where the woods end, there were coal tits flitting about all over the place so I sat to watch them a while. 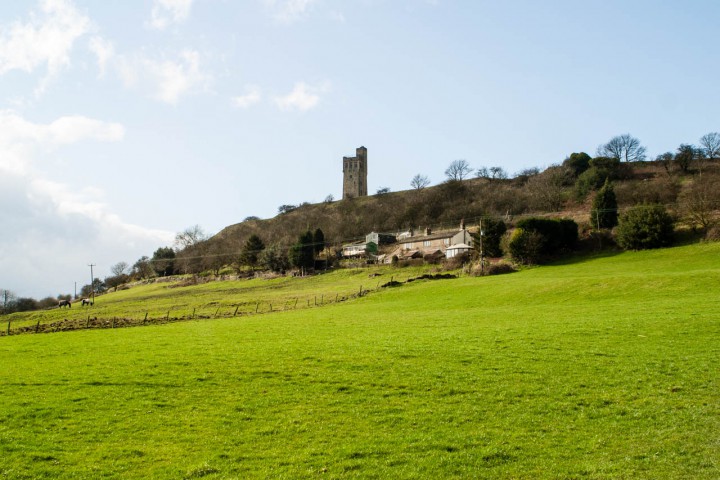 Castle Hill dominates, now, and your aim is simply to get there. The footpaths are well marked and plentiful around here so pick whichever route suits. It’s quite a steep climb around here. I took a moment to rest and have a drink on a stile near The Lumb farm. Once at the top, you’ll see the castle, actually called Victoria Tower, and panoramic views across Huddersfield, over to the Pennines and the ubiquitous Emley Moor mast. I’ve not mentioned Emley Moor Mast in this write-up but there’s hardly a time where it cannot be seen.

Spend plenty of time on Castle Hill, if the wind allows and it’s not too busy. Thankfully there were only a few people up there when I went. As usual, there were kids flying kites but, excitingly for me, there was a group of lads racing a petrol powered remote controlled off-road buggy up and down the valleys and powersliding their way around the grass. I think I want one of those!

Another thing you’ll see from the top is the beautifully designed and built Round House in Hall Bower. This wasn’t part of my walk when I originally planned it but crowbarred it into the route at the last minute. I’m pleased I did as it is a lovely building. Opposite the Round House is Hall Bower school which is a proper old Yorkshire building. From there you walk down the length of Hall Bower Lane where, if your walk is like mine, it will begin to rain. It is Yorkshire after all.

The tower blocks of Berry Brow will be in view by now signifying your destination. Quite a contrast to the rolling hills and beautiful architecture of before. The problem with architecture is that as nice as Victoria Tower, St.Lucius Church, The Round House and most of the other buildings you see of your way are, it’s nothing like as useful as a pair of tower blocks! Shame. 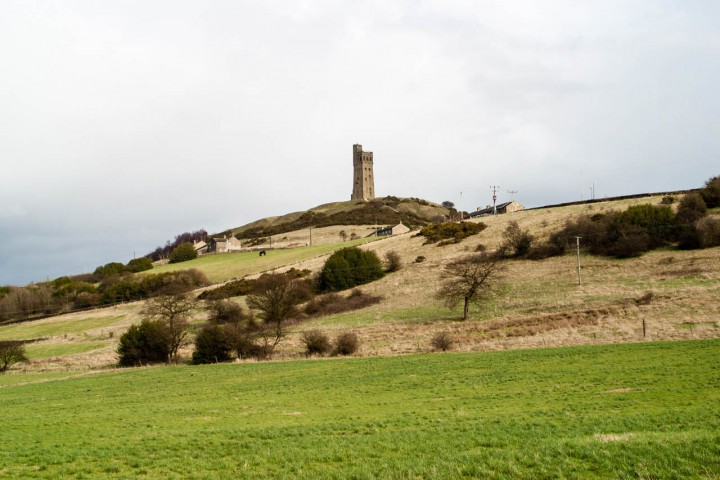 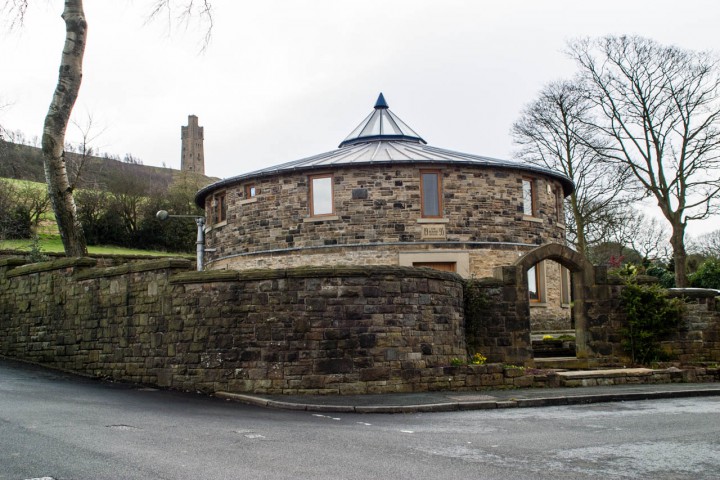 The Round House, Hall Bower

At the end of Hall Bower lane, you will see an entrance to a field. You could carry on down the road, it’s a shorter route and more directly downhill and if you’re starting to flag, I wouldn’t begrudge you that choice. My thighs were beginning to ache walking down Hall Bower Lane but I pushed on. The problem was that although I planned to walk across the field then onto the next one, I turned too sharp right and ended up making my route longer and having to walk down the road I intended to avoid. Oh well, serves me right for not buying the 25k map for that area on my GPS!

That’s more or less it, really. All that’s left to see is a nice view towards the derelict mill of Newsome to your right and Berry Brow Primary School, another proper old building which has a nice cottage attached to it. Along that road is the train station and your car, if you have one.

I hope you enjoy the walk, should you choose to go on it. I certainly did. I got quite lucky with the weather and although the wind rips past your ears at the top of Castle Hill and in another couple of places, there is enough woodland to break it up. The walk has plenty of variation; woods, rivers, ups and downs, architecture modern, old and mysterious and a train ride.

Thanks for reading. Be sure to check out the downloads and photos.

Click images for larger versions. Images of 1920px along the longest edge are available from the Castle Hill Walk, Huddersfield: Stocksmoor to Berry Brow Flickr album.

Must be this way then…